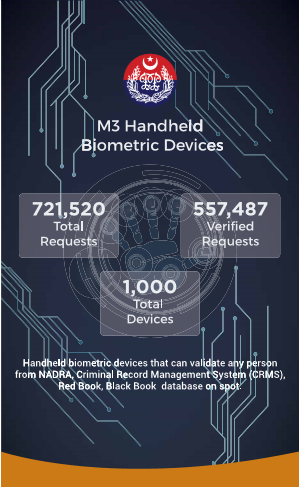 Previously, policemen working in the field or at checkposts did not have any technological support. They checked various people and relied on their intuition to identify a suspect or a criminal. Often, national identity cards carried old pictures and it was not easy to correctly recognise a person with the picture on the identity cards. Many times, suspects refused to provide their identity cards. Moreover, there are many Afghan refugees living permanently in Pakistan who do not have national identity cards and are, instead, issued Proof of Registration (POR) cards for their identity. All these factors hampered correct identification of suspects in the field or at checkposts.

The PITB procured M3 biometric devices and programmed them to deal with these issues. The devices are connected to NADRA and criminal databases through a server. They are also connected to the Red Book, Black Book, 4th Scheduler and Habitual Criminals database. A user can take the suspect’s national identity card number and take their fingerprint scan with a handheld device. This provides instant verification from the server. The server connects to the NADRA database, Criminal Record Management System (CRMS), Red Book, Black Book and reveals the full history of the suspect in seconds. In the case of Afghan refugees, the system connects to relevant database. If the subject does not produce the national CNIC or POR numbers, the system can search the suspect’s presence in criminal databases using their fingerprints. This system is used by the police in all search operations. It was used in the operation against Chotu Gang in the Kacha area of Rajanpur. It was used several times at Raiwind Ijtema and other public gatherings. It was also used by police when the Zimbabwe cricket team was visiting Pakistan and during the final game of Pakistan Super League held at Qaddafi Stadium in Lahore. More than 1,000 devices were distributed among policemen and other security agencies in the Punjab. As many as 840,491 requests have been generated from these devices to date.