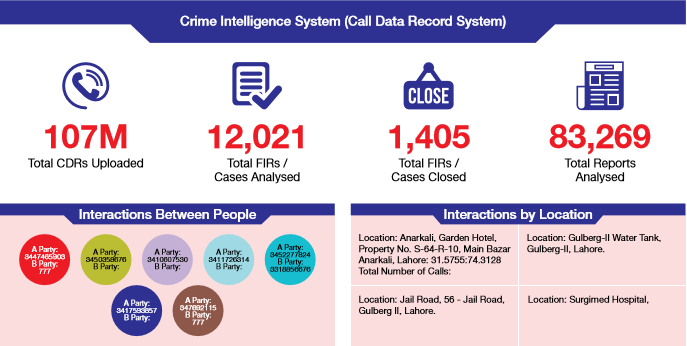 Punjab Police and the Counter Terrorism Department (CTD) do CDR-based analysis for major crimes. They acquire call record data from telecommunication companies and identify criminals based on their calling patterns. This was previously done manually in excel files, making it a time-consuming process prone to errors. The PITB, in partnership with the Punjab Police, has automated the entire process through an analytics platform which imports of CDRs into the system and analyses the records with reports and filters. The CDR system automatically identifies suspects based on suspicious calling patterns and activities (e.g. multiple SIMs used in one IMEI or receiving calls from a foreign country). The system provides a complete profile of suspects, fetching their data from all systems integrated at the backend. The police has traced numerous suspects using this software which also keeps records closed cases which details of suspects, their calls patterns and their known associates.