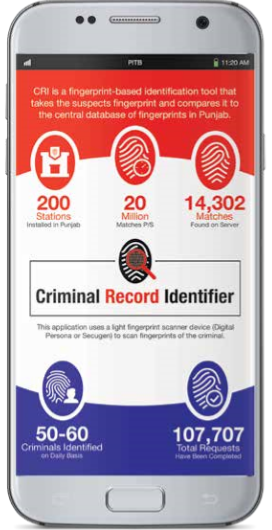 Lack of proper identification documents served as major hindrance for law enforcement personnel when they tried to identify criminals and suspects. In the absence of identification papers, many criminals would pretend to be first-time offenders. Others would take refuge in different districts. As a result, police and law enforcement agencies did not have a mechanism to maintain profiles of criminals. Finding information about one criminal from a huge set of paper records was almost impossible. To resolve this problem, the PITB developed an application called Criminal Record Identifier (CRI). This application uses a fingerprint scanner device to scan fingerprints of a suspect. The CRI’s fingerprint-based identification tool scans the suspects’ fingerprint and compares it to a central database of fingerprints.

The central database server contains database of criminals from across the province. The tool works at a speed of over 20 million matches per second.  The CRI has been installed in more than 200 stations across the Punjab. On average about 50 to 60 criminals are being identified per day from these stations. Since, November 1, 2016, a total of 107,707 requests have been made on the server and 14,302 matches were found. The performance of the CRI can be monitored by a dashboard in monitoring rooms of the CPO and CRO offices in Lahore. The dashboard shows statistics and a complete log of users. The PITB and the Punjab Police are constantly adding new features to the CRI to enhance utility of the programme. If this programme is adopted by governments of all four provinces and the federal capital, criminals could be identified from all over the country from any station. Sindh Police has already started digitisation of their criminal records. Very soon Sindh and Punjab police will begin sharing their database of criminals.