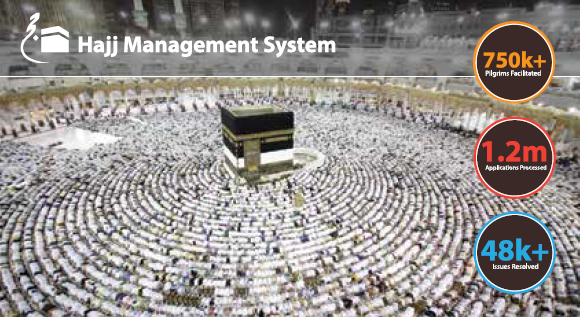 Annually around 1.5 m Pakistani pilgrims travel to KSA to perform the religious obligation. Majority of Hujjaj are travelling for the very first time outside Pakistan and average age of a Haji is 55 plus with a very low formal educational background. Therefore, such a large number travelling in such short time create a lot of problems like lost people, lost belongings, unawareness of laws and policies, health and lodging issues.

Hajj operations are managed by Ministry of Religious Affairs and Interfaith Harmony and traditionally were handled through manual and severely cumbersome processes.

Keeping in view the needs of the pilgrims, in 2013, Ministry of Religious Affairs sought PITB’s help to automate their complete end-to-end hajj operations with modern and robust mechanisms; with the aim to ensure transparency, mitigate corruption, manage efficiently, and guarantee convenience for all stakeholders.

Today, the platform has more than 15 working modules including:

338,696 applicants (89,040 groups) were registered through the Government Hajj Scheme Applicants Online Registration System. This year 10 designated banks with 9,061 branches and more than 19,000 bank officials were involved in online registration for 10 days through a centralized system of PITB without a single second of downtime.

Previously, balloting used to take 2 – 3 months but now it is processed in just a day and results are announced through SMS & also made available online in just an hour’s time. The automation at Haji Camps gives the visibility of the exact pilgrims trained and vaccinated rather than just a number. Presently, flight scheduling and booking takes only 2 days. Further, building and room allocation used to take at least six to seven hours which is now accomplished in just 20 minutes. Through improved coordination with banks, differential amounts reimbursed to pilgrims before the departure of their flights are now reconciled immediately through a centralized system. Hajj Monitoring System has also helped to improve monitoring process through feedback and complaints launched on the system. The platform also provides comprehensive dashboard to all the concerned authorities for better management and timely decision-making.

These revolutionary solutions are well-received by the pilgrims and the Ministry alike during management of Hajj operations every year. Last but not least, it has been a matter of great honor for PITB to implement the same for Nigerian government.